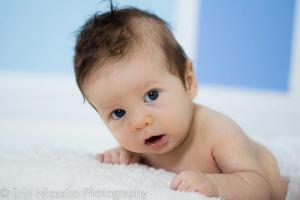 The picture of the Gageman is there simply for your enjoyment because he is the cutest thing…and I just like to show him off. Erin Nicastro took pictures of him earlier this week, and we celebrated his three-month birthday!

Now, on to business…

Yes, I am a week behind, but last week was crazy with wedding madness times two! I continued with my personal memory work, I just didn’t get a chance to get on here and post. So, here we are: Galatians 3:7-9.

7 Know then that it is those of faith who are the sons of Abraham. 8 And the Scripture, foreseeing that God would justify the Gentiles by faith, preached the gospel beforehand to Abraham, saying, “In you shall all the nations be blessed.” 9 So then, those who are of faith are blessed along with Abraham, the man of faith.

Yup, it’s a short passage this week. My simple question to you is this: WHAT IS THE GOSPEL?

If I asked you to tell me the gospel of Jesus Christ, what would you say? Would you pull out an evangelistic tract that says, “The Four Spiritual Laws” on the cover? Would you walk me down the “Romans Road”? Would you begin asking me which of The Ten Commandments I had broken?

Let me be clear: I am not being critical of any particular method of sharing the gospel. But generally speaking, I think we simply make it more difficult than it has to be.

One of my favorite authors, Dr. Timothy Keller, discusses this topic in the second chapter of his book, King’s Cross, much better than I ever could. So, why reinvent the wheel? Here’s Keller:

Euangelion in Greek, which is translated as “good news” or “gospel,” combines angelos, the word for one announcing news, and the prefix eu-, which means “joyful.” Gospel means “news that brings joy.” This word had currency when Mark [the gospel-writer] used it, but it wasn’t religious currency. It means history-making, life-shaping news, as opposed to just daily news.

For example, there is an ancient Roman inscription from about the same time as Jesus and Mark. It starts: “The beginning of the gospel of Caesar Augustus.” It’s the story of the birth and coronation of the Roman emperor. A gospel was news of some event that changed things in a meaningful way. It could be an ascension to the throne, or it could be a victory. When Greece was invaded by Persia and the Greeks won the great battles of Marathon and Solnus, they sent heralds (or evangelists) who proclaimed the good news to the cities: “We have fought for you, we have won, and now you’re no longer slaves; you’re free.” A gospel is an announcement of something that has happened in history, something that’s been done for you that changes your status forever.

According to Galatians 3:8, what did the Scripture preach to Abraham? The gospel. And what was that fairly simple gospel? That in him, all the nations would be blessed. If I may put it quite simply and plainly, the gospel of Jesus is the good news that through Abraham’s seed, Jesus, WE ARE BLESSED.

In his book, GOSPEL, one of my favorite podcast pastors, J.D. Greear, says this:

I want to close with a few more words from Keller:

How do you feel when you’re given good advice on how to live? Someone says, “Here’s the love you ought to have, or the integrity you ought to have,” and maybe they illustrate high moral standards by telling a story of some great hero. But when you hear it, how does it make you feel? Inspired, sure. But do you feel the way the listeners who heard those heralds felt when the victory was announced? Do you feel your burdens have fallen off? Do you feel as if something great has been done for you and you’re not a slave anymore? Of course you don’t. It weighs you down: This is how I have to live. It’s not a gospel. The gospel is that God connects to you not on the basis of what you’ve done (or haven’t done) but on the basis of what Jesus has done, in history, for you. And that makes it absolutely different from every other religion or philosophy.

I believe Jesus preached the gospel boldly and clearly from the cross as He screamed, “It is finished!” The Victor announcing His victory…to all mankind.

What do you think? Cancel reply